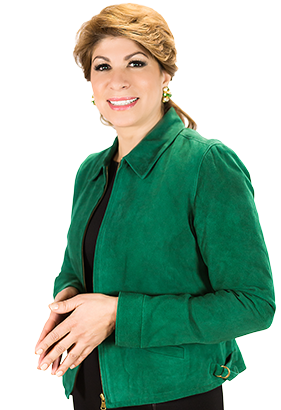 Ms. Angeles spent her early years in New York working in printing and marketing. She left a promising career in that field to co-found the first L.A. Riverside office in 1994. Beginning with a single office and no clients, today Ms. Angeles oversees a brokerage firm with several offices serving thousands of clients across New York City.

As one of the most respected and recognized taxi and livery insurance brokers in New York, Ms. Angeles serves as Spokesperson for the Livery Base Owners Association (“LBOA”). The LBOA represents over 250 taxi bases with over 11,000 affiliated for-hire vehicle drivers. As Spokesperson, she was a leading advocate of the “Green Cab” bill signed into to law in February 2012.

From 2009 to 2017, Ms. Angeles hosted the successful “La Hora del Conductor” radio program on Univision/Radio WADO 1280 AM and later on La Mega 97.9 FM. As a noted expert on the taxi and livery industry, the program covered a range of topics related to the industry and became a forum for discussing important regulatory and enforcement issues.

In addition to her work in the taxi and livery industry, Ms. Angeles serves on the Board of Hostos Community College and is acting Chair of the Dr. Nasry Michelen Foundation. She also served on the Boards of the Association of Progressive Dominicans (ACDP) and the Puerto Rican Family Institute.

In 2012, Ms. Angeles was honored as “Latina Businesswoman of the Year” by the New York State Senate and as a “Woman of Merit” by El Diario La Prensa. She also received the “Hermanas Mirabal Award of Outstanding Merit” from the Counsel General of the Dominican Republic. In 2016, the Institute for Latino Studies honored her as an Illustrious Award recipient for her excellence in business and entrepreneurship, and the Ministry of Tourism of the Dominican Republic honored her for promoting Dominican culture in the United States.

Ms. Angeles was born in Villa Trina, Moca, Dominican Republic. She graduated with a degree in Industrial Engineering from the Universidad Catolica Madre y Maestra and later from Farleigh Dickenson University with a Bachelor of Arts degree in Public Administration.